The first step to making a great video is having a great shot list. It's a vital ingredient, no matter how small or large your crew or cast is. A shot list is a kind of to-do list that helps everyone stay on the same page.

We’ve created a free shot list template that you can use with Google Sheets or Microsoft Excel. This free download is perfect for any kind of film production – from short films to music videos, and everything in between. 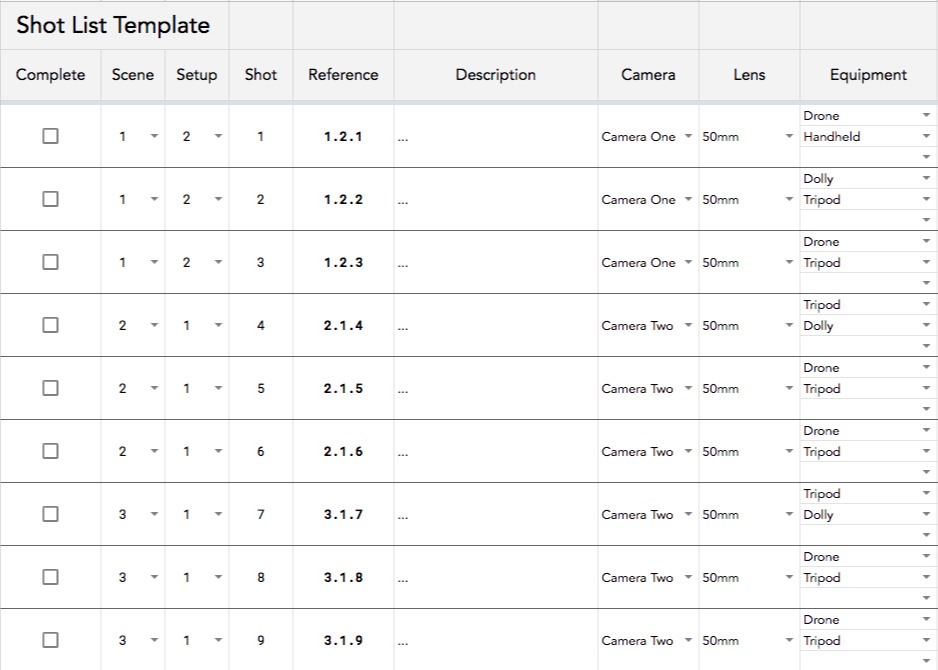 Google Sheets Shot List Template
Perfect for any kind of film production – from short films to music videos, and everything in between.

Why are shot lists important?

It’s easy to get lost during a shoot, even with a small team. If you’ve got lots of settings, multiple actors, and a large crew, then things only get more complicated.

A shot list keeps a project on track. Before filming, it helps directors to collect their thoughts and build a shooting schedule. During filming, a solid camera shot list means different departments can work independently from each other. It also makes it easy to keep going if a crew member’s sick one day, or has to leave the shoot.

You should make your shot list after finishing your script, at the same time as creating your storyboard. Your shot list will help you visualise what you want. It'll make it easier to organise the cast, crew, equipment, and locations that bring your vision to life. (Side note: you'll need a few extra documents, like call sheets, tech specs, and license agreements – they all stem from the shot list.)

Remember to organise your shots by location. Putting similar shots together makes shooting easier because you can shoot them all at the same time. (Note: this might not be in order of shot number. And that's okay!) This makes filming way more convenient – even if you're not shooting in the order of your storyboard.

Looking to make a short film? Check out our handy guide: How to make your first short film

Check out our guide to camera moves and angles to learn more about camera fundamentals.

Google Sheets Shot List Template
Perfect for any kind of film production – from short films to music videos, and everything in between.

Fail to plan, plan to fail

Shot lists are critical to the pre-production process. Like storyboards, they save time by creating consensus and keeping your team on the same page during production.

Shot list software for professional video teams. Get organized, produce your best work.
Get FREE Access
Read Next
The 9 Essential Video Transition Effects
Video transitions are a staple of video editing and motion graphics. Learn about the dos and don'ts of transitions in this handy guide.
How to Storyboard a Short Film
Storyboarding's a way to visualise the storyline of your short film, breaking down every last bit of action into individual storyboard panels.
The 16 Types of Camera Shots & Angles (Video Guide)
Do you sometimes feel like your vision for a film is lost in translation? It can be a frustrating experience, but one that can be avoided (or at least minimised) by understanding and implementing some storyboarding fundamentals.
Templates
Learn
Product
Company & Legal