Do you sometimes feel like your vision for a film is lost in translation? It can be a frustrating experience, but one that can be avoided (or at least minimised). Before you move on to more advanced video transitions or animatics, a solid understanding of storyboarding fundamentals will take you a long way.

Armed with a working knowledge of camera shots, angles, and perspective techniques, you’ll be well on your way to creating easy-to-read storyboards, which communicate your vision as you intended it. To that end, we've pulled together 16 camera moves and shot types to give your storyboarding vocabulary a boost. 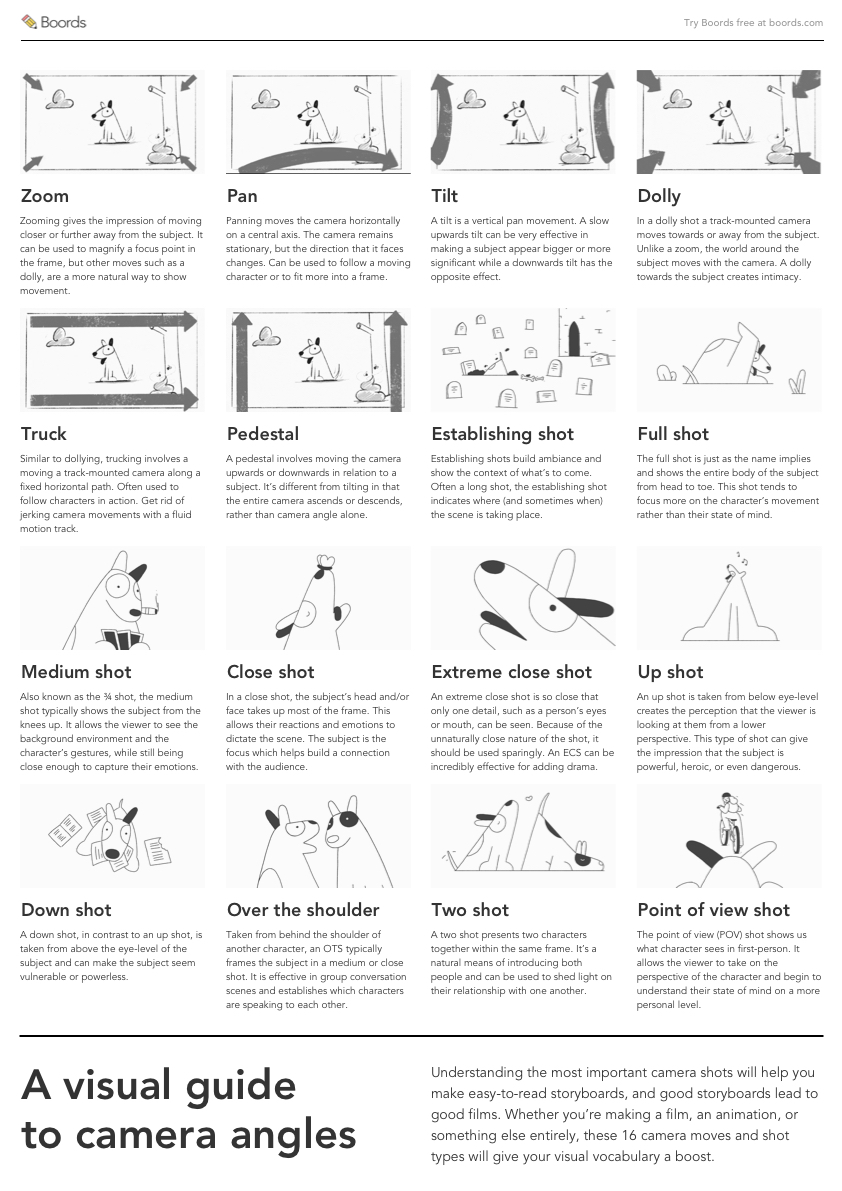 By incorporating a variety of different camera moves into your shots, you can add a deeper sense of visual interest. Combine this with a strategic approach to messaging and you'll be off to the races. As with deciding how to frame your shots, take care when selecting the most appropriate camera move. The effect that each move has can vary significantly in how it makes the viewer feel.

Here are some well-loved camera moves to consider:

Probably the most well-known camera move, zooming gives the impression of moving closer or further away from the subject. It can be used effectively to magnify a certain focus point in the frame, but other moves such as a dolly, are a more natural way to show movement. While a quick zoom can help add a sense of drama and energy when used correctly, avoid over-using zoom as your default move.

Also if you're making a storyboard, Boords has pre-built indicators for Zooming (as well as a bunch of other common camera moves). Just click Insert Camera Movement in the Image Editor:

Panning is when the camera is moved horizontally from one side to another on a central axis. This is a rotating movement in which the camera’s position remains in place, but the direction that it faces changes. It can be used to follow a moving character or to fit more into a frame, for example, panning across a landscape to create a sense of place.

Making a storyboard? Show yourself some love and use our pre-built camera shot indicators.
Open a new storyboard

Tilting is similar to panning in that the camera is kept in a stationary position, but unlike panning (which looks from side to side) tilting focuses on upwards & downwards movements. Using a tilting motion helps to fit more into a single frame. A slow upwards tilt can be very effective in making a subject appear bigger or more significant while a downwards tilt has the opposite effect.

A dolly shot is when the entire camera is mounted on a track and is moved towards or away from a subject. Unlike a zoom shot, the world around the subject moves with the camera. A dolly gives the illusion that the viewer is walking towards the subject and can be a great way of creating a sense of intimacy between them.

Similar to dollying, trucking involves moving the entire camera along a fixed point, but the motion goes from side to side, rather than in and out. It’s often used to follow characters in action. Mounting the camera on a fluid motion track will help to stamp out any jerking camera movements.

To add a truck indicator in Boords, just select Pan right from the Camera Movements menu in the Image Editor:

A pedestal (AKA Boom up/down or Jib up/down) involves moving the camera upwards or downwards in relation to a subject. It’s different from tilting in that the entire camera ascends or descends, rather than just the angle of the camera. A pedestal shot can be used to frame a tall or high subject (such as a building) while keeping the framing at eye level view for the viewer.

There are many ways to frame a subject within a shot, which can range from showing their entire body to fixating on a finer detail, such as their eyes. In choosing the most fitting shot, you’ll need to bear in mind the message that you’re trying to communicate to your audience.

Here are some of the most common types of shots and how you can go about using them:

Often included at the beginning of a scene, the establishing shot helps to build ambiance and may give a nod towards the context of what’s to come. It generally comes in the form of a long shot and indicates where (and sometimes when) the scene is taking place.

The full shot is just as the name implies and shows the entire body of the subject from head to toe. This shot tends to focus more on the character’s movement and gestures, rather than their state of mind.

Also known as the ¾ shot, the medium shot typically shows the subject from the knees up. It allows the viewer to see the background environment and the character’s gestures, while still being close enough to capture their emotions.

With a close shot, the subject’s head/face takes up the majority of the frame and therefore, allows their reactions and emotions to dictate the scene. The subject becomes the prominent focus and helps the audience build a personal connection, without being distracted by background interferences.

An extreme close shot is so close that only one specific detail, such as a person’s eyes or mouth, can be seen. Because of the unnaturally close nature of the shot, it should be used sparingly, but when used appropriately, an ECS can be incredibly effective at adding drama to a scene. It allows the viewer to see details that may have otherwise gone unnoticed and can really accentuate the emotions that the subject is experiencing.

An up shot is taken from below the eye-level of the subject and creates the perception that the viewer is looking at them from a lower perspective. This type of shot can give the impression that the subject is in some way powerful, heroic or even dangerous.

A down shot, in contrast to an up shot, is taken from above the eye-level of the subject and can make the subject seem vulnerable or powerless.

Over the shoulder shot

This type of shot is taken from behind the shoulder of another character and typically frames the subject in a medium or close shot. It is particularly effective in group conversation scenes and helps establish which characters are speaking to each other.

What's the best way to plan your film? With a storyboard of course. And it just so happens Boords is the best web-based storyboard software going.
Try Boords Free

A two shot presents two characters together within the same frame. It’s a natural means of introducing both people and can be used to shed light on their relationship with one another. Different variations of the two shot can be applied to deliver different messages about the characters. For example, when characters are positioned next to each other, it may give the impression that they have equal prominence within the scene.

The point of view shot, also known as the POV shot, depicts an angle that shows what a character is looking at. This type of shot allows the viewer to take on the perspective of the character and begin to understand their state of mind on a more personal level.

Applying this to your storyboards

While a picture often speaks a thousand words, being precise with your language can really make the difference when it comes to storyboarding. Keep it simple yet specific, and you’ll be on track to a brilliant animatic and beyond.

What are some of your favourite shots to work with? Ever had an experience of ideas getting lost in translation? Tell us about them in the comments.