How to Write a TV Commercial Script

Writing commercial scripts for TV ads is entirely different from screenwriting a screenplay.

Not only is a video script for a TV commercial only 15 to 90 seconds long compared to the 90 minutes of a feature film, it also follows a different format.

While screenwriting software has largely automated the formatting part of scriptwriting, you can write a TV commercial script with a template. We’ll talk about the commercial script format and give you a free template to download. We’ve also compiled tips for you on how to write a great commercial and explain important terminology. 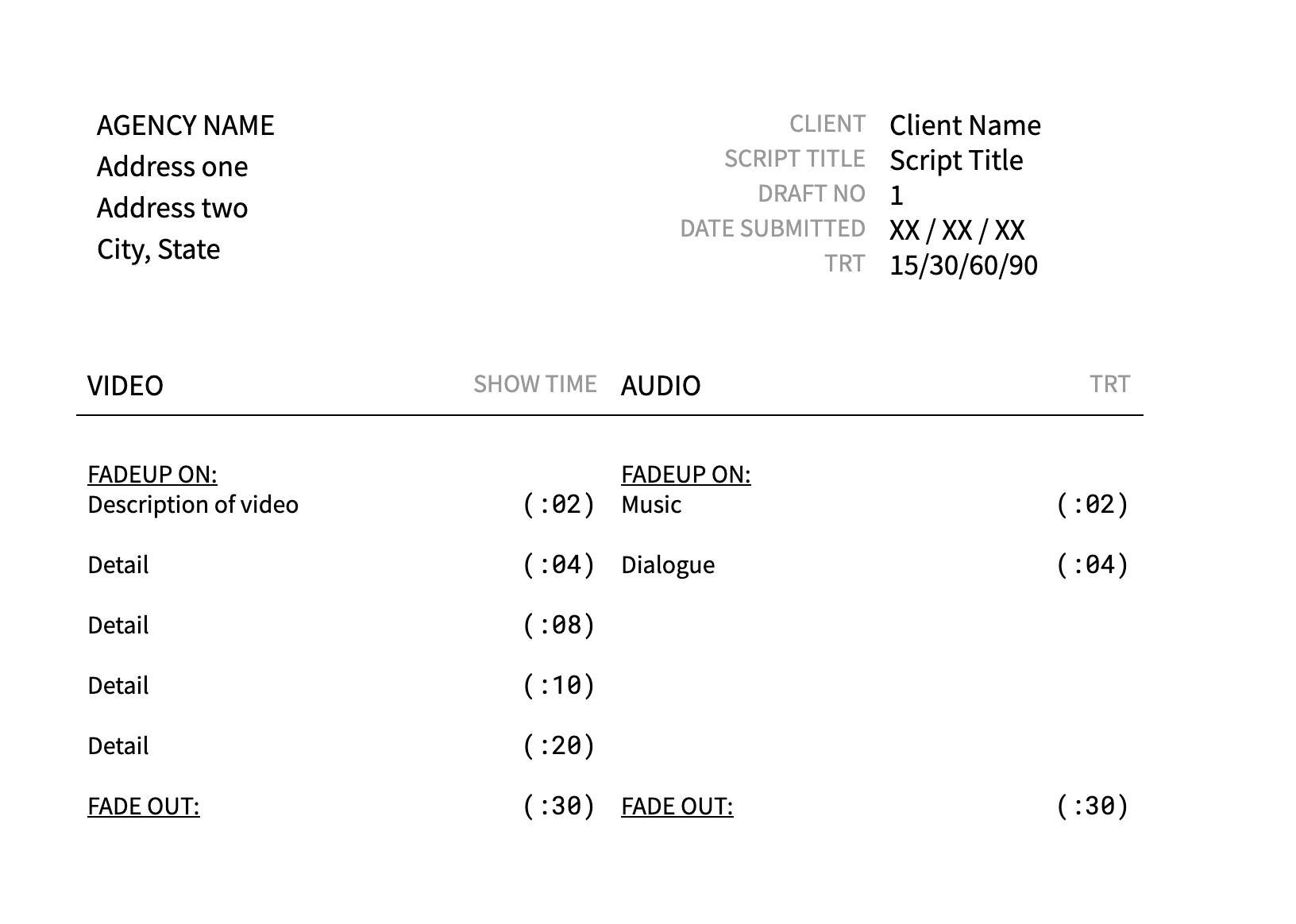 Television commercials follow a much more concise format compared to feature films. There are two reasons for this: length, and timing.

A TV commercial is short and you have to win over the target audience within 15, 30, 60 or 90 seconds maximum. The pacing needs to be perfect, so a TV commercial script has to convey time well. A movie script alternates dialog and action lines, creating a varying pace. A TV ad separates audio and visual to give a more precise sense of timing.

Like a storyboard, the script gives an overview of events in sequence, though just as descriptions. Thanks to the format, the reader is also able to tell at a glance which elements are paired up together and are happening at the same time. If you’re looking at a script for a TV commercial for the first time, you’ll notice it’s just a short informational header followed by two columns. Let’s go over what goes where!

The heading contains all the important information about the spot or the project:

The left column answers the question: what do viewers see? Compared to a screenplay, the information in the visual column is what you convey in scene descriptions and action lines with clear and concise writing. The visual language needs to be unambiguous and on point for the target market. Reading your script, the client needs to know you are aligned with their brand and the objective of winning over potential customers.

To repeat, anything visual will be in this column, from shots to graphics and on-screen text as well as camera directions such as close-up or wide shot. Write the visual cues in all caps and be as specific as you need to be. For clarity, shots can be numbered in their order and you can indicate shot length in brackets like so: "(:05)". You can provide distinct location names if any have been chosen or reference existing visual material such as a tile from a storyboard–some companies even include thumbnails in the visual column.

Likewise, the right column answers the question, what does the audience hear? The audio column of your commercial script contains descriptions of all audio elements and possibly further information such as length or source. Audio used in a TV commercial can be dialog, voiceover, music, a jingle, sound effects or a tagline.

In the audio column, you write everything that isn’t dialog in all caps. Dialog lines begin with a character’s name, followed by a colon and their line or lines, like so: “TROY: “Hi, I’m Troy McClure.” Ideally, the names for all speakers start with a different letter so you can abbreviate them after the first appearance. To keep the runtime in check, specify the length of audio elements such as effects, jingles and musical cues where available.

As we’ve noted above, the advantage of the two column layout is the sense of timing, so make sure that visuals and audio line up horizontally in their respective columns so the shot description and the corresponding audio begin on the same line.

Create an online storyboard for your next TV commercial with Boords. Trusted by 150,000+ creatives.
Open a new storyboard

How to Write a TV Commercial – Step-by-Step

Now that we’ve cleared up the formatting of commercial scripts, let’s talk about best practices for writing TV ads. The best commercials are defined by a clear storyline, the right tone for the target audience, an interesting theme, and a clear call to action.

A simple story isn’t bland or boring, but it’s easy to follow and understand. Let that principle guide you when crafting your commercial script storyline. The beginning, middle, and end should all be clear and in a logical sequence. Exceptional storytelling captures the audience right away, introduces tension, and provides a resolution at the end.

To make potential customers care about the advertised product or service, you have to elicit an emotional reaction. Many TV ads therefore follow the good and simple story approach of problem or pain point and solution: describe a problem viewers have and outline the discomfort associated with it, then provide the solution and describe the advantages of it.

Don’t make the mistake of associating the feelings of viewers with just one column in the script layout. Some writers assume that audio and visual stand for “see” and “feel”–but the emotional response is the combination of both visual and audio running together, so be creative to define and tell a story that is greater than the sum of its parts.

A funny commercial is everybody’s darling–and probably the most difficult kind for which to get a client’s approval. To find the right tone, you have to align with the brand and pick something that resonates with the target market. The brand guidelines will be your first stop for deciding on a TV ad tone to write a successful script: is it energetic, exciting, playful, positive, cheerful, calming, trustworthy, reliable, sophisticated, classy, sincere, or soothing?

Adjectives like these can be helpful when describing the tone you’re aiming for. As the next step, find visual and audio elements associated with that adjective or the feelings it elicits. Keep in mind that when writing multiple scripts for the same ad campaign, the challenge can be to set a different tone for each while conveying the same message.

A great commercial can stand by itself, but the best commercials also integrate into something larger: they speak to a theme. A recurring theme can be set by the company, brand, or longer running ad campaign itself, but the theme for a TV ad can also be a trend of the times and something the target audience will recognize from their daily life (and its struggles).

In effective commercial storytelling, the theme is often part of building brand awareness as viewers will recognize memorable elements such as characters or visuals from a marketing campaign across various channels. The theme can also come into play in elements such as sound effects or even be mentioned in the tagline, but if you overdo it, the audience might feel like you’re hammering it home too hard.

Step 4. Pick a call to action

Last but not last, the CTA is not a mere afterthought tagged on at the end of the commercial, it’s what you’ve been building up to over the entire video script. To get there, you have to know where you’re going, so your call to action needs to be clear from the outset. The guiding question is always, what do you want viewers to do after they have seen the television commercials?

Raising brand awareness is often part of the gial, but it doesn’t translate to a tangible call to action. Big brands often have an existing tagline already that might substitute the CTA, but the call to action depends on the potential customers of the target market. Research by the client might show what they will respond to, so ask for specifics.

A simple but effective way is always to instill some sense of urgency in viewers: don’t just give them contact information, have them “call now!” An offer is not only great and valuable, it’s also “available for a limited time only!” This is the dual setup of an effective commercial: it instills desire for the valuable product or service, combined with the fear of missing out.

Create an online storyboard for your next TV commercial with Boords. Trusted by 150,000+ creatives.
Open a new storyboard

TV scripts come with their own special vocabulary and involve both marketing as well as scriptwriting terminology. In the following glossary, we’ll introduce you to the most common terms you’ll need:

Read Next
How to Storyboard a TV Commercial
Storyboarding's a way to visualise the storyline of your TV commercial, breaking down every last bit of action into individual storyboard panels.
How to Write Dialogue
Good dialogue is the thing that makes your story ring true for your audience. If it's believable, they'll be on your side. If it doesn't sound like real life, you'll probably lose them.
How to Tell a Story
It takes a lot of work to tell a great story. Just ask all the struggling filmmakers and authors, hustling away at their craft in an attempt to get a break.